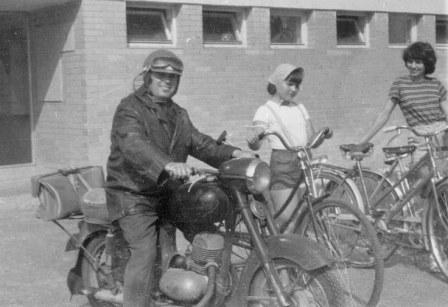 My father’s family came from Slovakia. My grandfather grew up in Drahovce, about an hour’s travel from Bratislava, the capital. He emigrated to the United States for better opportunities when he was 19, before World War I. He left behind his parents and two sisters, the younger of which was the mother of Cyril Kudela, the gentleman you see here.

My grandfather’s departure essentially split the Petráš family in two. He wrote his family but never returned to Slovakia. We knew we had relatives in Slovakia but no one quite knew how many or where. My father’s sister was the only one who maintained a line of communication with the family in Slovakia. I was able to contact them in 2004 and we were able to visit them in 2006. I saw my great-grandfather’s grave during that visit.

Cyril is a few years younger than my father. I don’t know for sure when this picture was taken, but I suspect in the late 1960s. That looks like Cyril’s daughter Iva behind him. The motorcycle is a 125cc Jawa, a bike made in Czechoslovakia.

June 2008: It’s already hot as we leave the hotel in the morning in Ehrenberg, Arizona, and cross the state line into California.

We’re looking for a gas station because the one next to the hotel was packed with cars and some of the pumps weren’t working, which guaranteed sweaty, irritable waits. We’d endured soul-killing heat throughout Arizona and I was too tired to fill up the night before.

The bike has enough fuel to get us into Blythe and we sail across the Colorado River bridge on I-10, getting no relief from the heat even over water. The sun is glaring. I pull into the first station, an Exxon just off the highway. It’s on the edge of agricultural fields that are baking in the heat, dry, dusty acres impossibly kept alive only by irrigation.

It’s about 105 degrees already and the air is still and dry. Even the cement of the road looks bleached. “How could anyone live here?” I wonder.

There is little relief even under the awning over the pumps. Linda gets off the bike and heads for the store. I pull the bike onto its centerstand, put my helmet on top of the gas pump, and fumble for the credit card.

While filling the tank I look around. There’s a small green metal shed with doors standing open that’s filled with old soda and beer cans. A collection point of some kind. A forlorn motel sits next door. The station itself is quiet and nearly deserted, only one other car or two.

I finish refueling and Linda returns. She stays with the bike as I go inside to use the restroom. When I come out, she’s talking with a woman who has seen the bike and wandered over, curious.

She’s deeply tanned and dressed to be looked at, sunglasses, sandals, shredded cut-offs, and a ragged shirt tied up under her breasts, leaving her belly bare. You can’t help but notice her muscular physique, like a female weightlifter, but there’s something wrong, because she looks wasted somehow, as if she’d spent a week in rehab before being kicked out. “She’s going to ask Linda for money,” I think.

But she doesn’t. Instead she’s telling Linda most of her life story, how she was a bodybuilder in California and did pretty well, but then had some sort of medical problem that required brain surgery and a plate in her head.

She and her husband stay at the motel next door after he lost his truck driving permit and they’re collecting cans and she should be taking medication but the medicine doesn’t really work for her so she drinks beer instead, calling it self-medication. Linda gently suggests this may not be a good idea, and the woman says she knows, but…

I catch movement out of the corner of my eye and turn to see a Hispanic man, a little older than me, pulling a kid’s wagon with a makeshift awning on it — four sticks and a towel stretched above. It’s piled with junk and cans and two small dogs are sitting in it, in the shade.

They have to be dying out here, I think, and the man pulls the wagon up to the hose at the station’s side and gives the dogs some water. They drink and he goes inside.

The bodybuilder is telling Linda she knows the man and that he collects cans, and she and her husband look after him. The man comes outside carrying a small bag of ice, which he puts in the wagon.

I search the pockets of my riding suit, looking for cash because I have to give this guy something, anything. And I don’t have a damn thing on me. I used up the last of my cash late last night in Ehrenberg because the truck stop’s credit card machine wasn’t working and we were buying food.

I find only four sad crumpled dollars but take them to the man. I put them in his hands and say “Vaya con Dios, señor,” the only Spanish I know, and in English he says, “in the name of Christ Jesus, amen,” and I walk back to the bike, ashamed of the four dollars, ashamed I can’t change anything for him, ashamed that I’m leaving him and his dogs in the heat.

The bodybuilder says good-bye and we climb back aboard the bike and I watch the Hispanic man leave. Where he is going I can’t imagine but later I will find him, again and again, burned into memory as he pulls the wagon and the dogs sit resigned and the ice bag melts, down the silent bone-white road, in the heat, in the sun, in the heat. 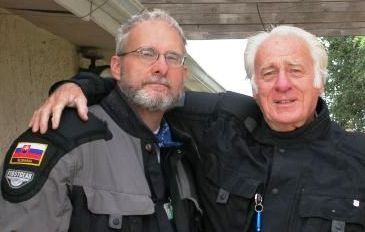 June 2002: I think my fascination with motorcycles truly began in February 1964 when Robert McDaniel, an adventurous uncle of mine, rode a black 305cc Honda Dream from San Diego to Cleveland, more than 2,000 miles.

He intended to ride to Florida to see his parents (my grandparents) but learned enroute they were in Ohio. He turned north in New Mexico, riding U.S. 70 where he passed through starkly beautiful country. He paused on the roadside for a smoke near the craggy mountains of Organ, N.M., and dreamed of Indians crossing the valley floor.

He had not anticipated riding north and was ill-prepared; his gear consisted of a leather jacket, Levis, light gloves, and three-quarter helmet with face shield. It was warm when he left California but he ran into a blizzard in central Ohio and skidded off an icy road and was nearly hit by a delivery truck.

But he toughed it out, kept going and finally arrived; Instamatic photos show him exhausted and disheveled in a black motorcycle jacket, images of family legend.

I tell you of his ride because it was the first pivotal moment in my personal history; I was six years old and it seized my imagination. We recreated his ride in June 2002 and stopped at the same place he did 38 years earlier; the mountains were still stark and serene.

August 2006: I’m on the motorcycle, rolling westbound on I-10 outside of El Paso in western Texas in the early evening when I see a huge dark cloud build up to the south. It’s so impressive I stop and take a few pictures as I put on a jacket.

The cloud keeps growing and getting darker, promising rain (rare for this part of the country). When the rain finally comes down, hard, I bail, looking desperately for a building with an overhang — a car wash, a bank with a drive-through window, a funeral home (don’t laugh, I spent an hour at one during a downpour in Eddyville, Kentucky).

In Socorro I find a darkened school administration building with a recessed entry way and nearly empty parking lot and I ride the bike right up the handicap ramp. The entry is 30 feet wide, 10 feet deep, and totally dry. Perfect!

A stack of sandbags lines one inside wall. I back the motorcycle into the opposite corner and set her up on the centerstand. Then I put my helmet and gloves on the top row of sandbags and sit down…I find it’s really comfortable, because the wall is angled inward toward the windows, giving me a natural place to recline.

I relax on the bags and watch the rain pour down. I’m dry and I have a half bottle of Gatorade and a package of peanut butter-and-toast crackers. Things could not be any better…I feel almost smug. The rain continues to alternate between moderate and ferocious.

A little over an hour later, the main door opens and a janitor comes out. He glances at me, says hello in a friendly way, and turns to watch the rain.

“Oh, no problem,” he says. “Just watch out for the black widows.”

“There,” he says, and points in my direction. “They like to hide in the sandbags.”