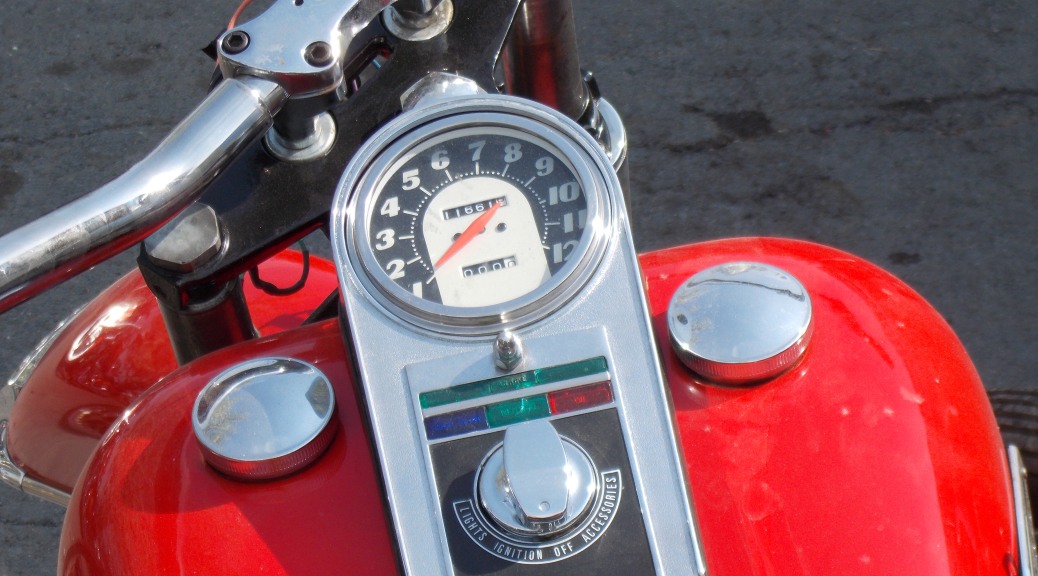 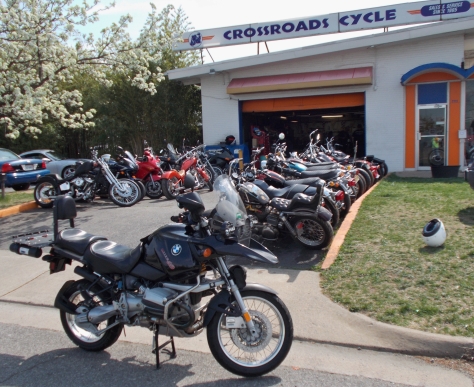 So I made the yearly hegira to Crossroads Cycle today for Endurance’s state safety inspection sticker. It’s something I do every April.

“You’ll have to give me a few minutes,” says Dennis Ferm, the owner, as he checks my bike. “The state has computerized the inspection records so now it takes three times longer.”

Crossroads Cycle was true serendipity. We must have been going to the REI in Bailey’s Crossroads eight or nine years ago when I happened to spot a white building on a side street with about two dozen motorcycles parked outside. Naturally, we had to investigate.

We found a small independent motorcycle shop with three or four guys who specialize in older bikes, especially Triumphs. There are older Japanese models there, along with a few Harleys. They fix up and sell a few bikes and do repairs on others.

It was a lucky discovery, time capsule-like, because independent motorcycle places – apart from those that customize Harleys or choppers – are a vanishing breed. It takes a special know-how to keep these bikes on the road. Those who can, like Dennis and his colleagues, are genuine mechanics. They really don’t work on the type of bikes I own, but I ended up gravitating there every year for inspection.

The improved quality, however, comes at a price of increased disassociation between owners and their machines. If you have a problem with your modern motorcycle or car, you can’t pull out your toolbox and fix it. You have to take it to the dealer so a mechanic can hook it up to the computer.

It’s to the point where people are discouraged from trying to fix anything. I hate that, it’s like being a prisoner of one’s own ignorance. Even though I’m not a mechanic, I can at least do some minor tasks like change the oils and filters and install some upgrades and try to learn what I can. I know when the bike is running badly and I have an idea of what should be done.

What little I know makes me greatly respect people like the Crossroads guys.

Understand that older motorcycles can be impossible to work on because: 1) it’s tough to find needed parts for discontinued models, and 2) older bikes are usually victims of neglect, sitting outside in the rain or parked unused for years. Tires crack and go flat, mice nibble wires, gasoline decomposes inside carburetors and leaves a gummy shellac. Most major dealerships won’t touch them because they can tie up mechanics for days.

It takes time, patience and institutional knowledge – the hard-won wisdom from lots and lots of time on disassembled bikes, parts fiches and greasy manuals – to work competently on older bikes. The guys at Crossroads are like this. They could probably get better-paid jobs at modern motorcycle dealerships but they wouldn’t be using all of their talents and doing what they really enjoy.

They’re in it for the love of it. They know older bikes are worth the effort.

A somewhat related aside: On the way to work a few years ago, I used to drive by a black late ‘70s BMW R100 Slash 7 parked on a residential street. It was there every day, rain or shine, uncovered and unmoved no matter the weather. It got to me so much I eventually stopped and left a note on the guy’s door, asking if he wanted to sell it. A suspicious neighbor confronted me as I was looking at the bike, as if I was going to steal it. I explained what I was doing and even gave him one of my business cards, but I don’t think he was convinced.

A day or two later the BMW disappeared and I never saw it again. The silly twit of an owner never contacted me but a few months later a used Kawasaki Concourse appeared in the BMW’s place, parked in the same spot, rain or shine, uncovered. I felt bad for that one, too.

The point is, if you have a motorcycle, you should try and take care of it, or get it to someone who can. Those who don’t aggravate those of us who do.

I think the craftsmen at Crossroads would feel the same about that BMW. And maybe that’s another reason why I look forward to paying my respects every year.