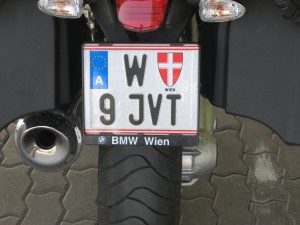 August 2009: During my first solo ride in Slovakia, I was pulled over by a cop.

I was heading to Drahovce from Piešťany, a distance of maybe seven miles, to see Cyril and Ilona at the old homestead. Linda and Iva had gone shopping.

So I’m alone on the motorcycle, and decide to take a small detour through Piešťany. We’d walked through town a few times and I wondered what it would feel like to take the bike through the streets. There were only a few cars on the road and I take it easy, though I do stand on the pegs a bit while rolling over the speed humps.

The officer is a young guy, maybe mid-20s, and he has a mustache and aviator sunglasses. He says something to me in Slovak that I don’t understand.

“Prepachte,” I say, “Moje slovencina je velme zla.” Which means, excuse me, my Slovak is very bad. It’s one of only a handful of phrases I know, but it did impress the Slovak Embassy staff back in Washington.

He says something else that I understood as “your Slovak is good” to which I say, “Nie, lutujem. Ucim sa len kratko.” Which means, no, I’m sorry, I’ve been studying only a short time. “Rozprovatche po anglicky, prosim?” I add hopefully, which means, do you speak English, please?

He says no, and starts walking around the bike, checking it out.

I pull off my gloves and remove the helmet and earplugs and start wondering what he makes of this. There are American and Slovak flags on the left sleeve of my flight suit and the bike has an Austrian license plate.

And I can’t figure out why he’s pulled me over. I have two theories, either he thought I was going too fast or he’s looking to make the town some revenue.

Iva’s husband Jozef was pulled over in Kosice while driving us across the country three years ago — something about making an illegal turn, forbidden by a sign that was pretty well hidden. The fine was outrageous and consensus was the officers were engaging in revenue enhancement.

Now the officer stands in front of the bike again and says something I totally can’t understand. “Lutujem, nerozumiem,” I say, which means, I’m sorry, I don’t understand.

We go back and forth like this for a bit, until he finally tires and motions for me to go. “Ah. Dakujem,” I say, which means thank you.

The rest of the ride to Drahovce is uneventful, but over dinner with my Slovak relatives that night there is much laughter when I tell what happened. They say the officer was probably just looking to collect a quick fine.