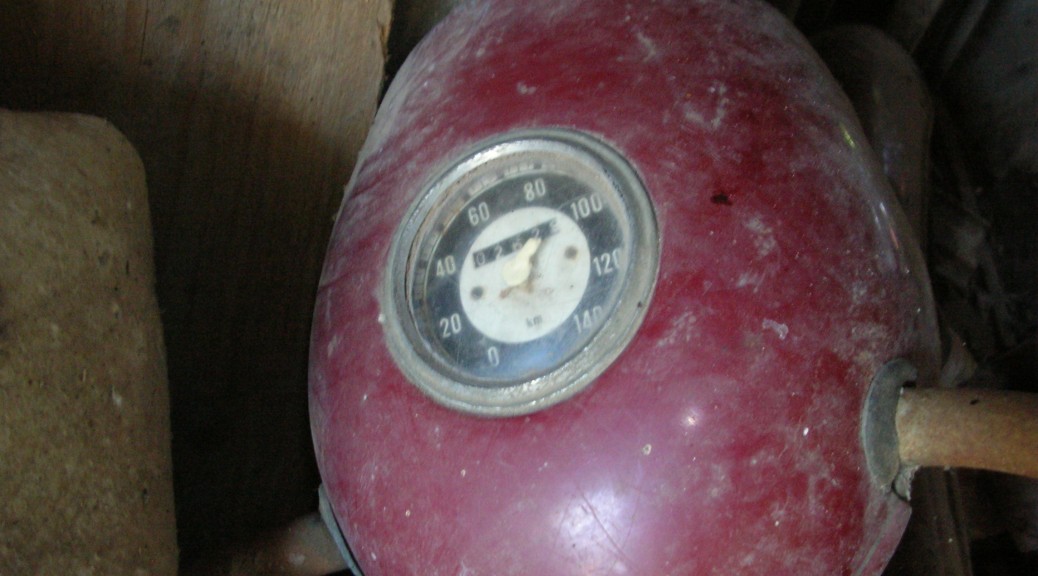 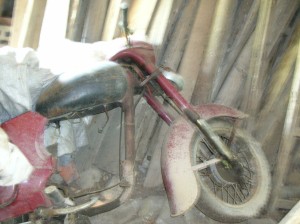 August 2009: I have a thing about old motorcycles because I can’t help but see one and start scheming, no matter how rusty and decrepit it is, to resurrect it, get it back on the road, make it useful again. I think there’s nothing sadder than a non-running motorcycle. It’s one of my great weaknesses and gets me in trouble from time to time.

In Slovakia, my father’s cousin Cyril was a motorcycle rider; he had a Czech-made 125cc Jawa decades ago. It was a practical machine for commuting during the days of communism, but it looked like fun, too. I have a black-and-white photo of Cyril on his bike and he’s smiling beneath his helmet.

Motorcycles tend to slip away from us. Maybe it’s the bad weather that prevents us from riding, or the necessity of suiting up like a deep-sea diver before riding or the bit of maintenance that eludes some owners. Sometimes it’s easy to put the bike away and forget about it for a while, and if you leave it long enough the tires go flat and the gasoline turns to shellac in the carburetors, or a cable rusts and snaps the first time you try it.

My grandfather’s 1916 Harley was sold to a neighbor while he was in the hospital, nearly 20 years before I was born; I would love to find it and restore it, but that won’t happen, there are no clues to its whereabouts after the neighbor resold it to someone else.

My uncle’s 1976 Honda Gold Wing was parked for a couple of years and suffered for it, but he did get it back on the road after I pestered him about us riding together. That’s a machine that should be given a ground-up restoration and be ridden frequently.

Cyril still has his Jawa, as I was surprised to find, under a tarp in a barn at the family home in Drahovce, Slovakia. After learning I wanted to see it, he led me outside and we pulled back the tarp.

Oh, it was in sad shape. It was covered with dust and the headlight was broken and the engine was gone, hidden away in another part of the barn, apparently. I wanted very much to roll it out into the sunlight and assess its condition, but it would have taken us half an hour just to clear a path and I didn’t have the time. I think Cyril was slightly embarrassed over its condition and preferred to leave it where it was. My poor Slovak prevented me from knowing.

But I put my hand on the Jawa’s throttle grip and wondered what it would be like to run it down the road. And I would have given a lot to have the Jawa in pristine condition, and have Cyril slip on his helmet again, and the two of us take our bikes across the Slovakian countryside, just as I wished I could go riding with my grandfather on his Harley.

One thought on “Ghost of My Grandfather”