Day 14: Friday, Sept. 16: I spend most of the morning hustling around Kincardine, Ontario, fueling up the bikes and looking for a tire pump at nearby gas stations. The Vespa and Terra Nova have lost a pound or two in both tires.

It’s a brief comedy of errors: I find the Petro-Canada station serves only trucks, and the Esso station’s tire pump isn’t working. I feel lucky to get gasoline into both motorcycles.

I hate leaving things unfinished, especially bike maintenance. But Nancy, at the Marriott TownePlace Suite’s front desk, sees I’m carrying a helmet and asks about our ride. When I say we’re heading for Niagara Falls, she says, “Oh, you should stop and see Boiler Beach before you go.”

“Boiler Beach? What’s that?” I say, imagining some sort of Yellowstone-like thermal spring in Lake Ontario.

“There’s a ship that blew up in the 1800s not far from shore,” she says, instantly warming to the story. “The only thing that’s left is the boiler and you can see it from the beach. That’s why they call it Boiler Beach. It’s a couple of miles away.”

Her enthusiasm and my interest in shipwrecks convince us to go. Linda gets directions and we set off with me promising myself to attend to the tires later.

We locate the correct road but can’t find the beach. After Linda queries a woman walking her dogs, we cruise on and catch a glimpse of something through a break in the trees. We park the bikes and walk down to the shore.

And there it is, the rusting hulk of a ship’s boiler, in a few feet of water about 20 yards from shore. We later learn it’s from the Erie Belle, a 112-ft. steam-powered tow tug that exploded and sank Nov. 21, 1883. 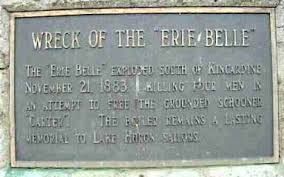 The Belle was struggling to free the J.N. Carter, a schooner that ran aground during a storm. Why the Belle blew up is a matter of conjecture, but they say a pressure valve on the boiler had been wired shut to build up more steam power.

The boiler exploded and the tug sank. Four of the 12 crewmen died and the stranded schooner rescued the rest.

Afterwards, the Belle was pulled closer to shore and taken apart for salvage. Later, others used a winch to drag the boiler inland, intending to cut it up for scrap, according to the Kincardine News. They were stopped by police.

So the beach became known as Boiler Beach, and its namesake has been quietly rusting away. People have been coming to see it for decades, apparently.

Our photos don’t do it justice, I think. My only wish is that my good friend Don Lee, an authority on all things with Great Lakes shipping, could see it, too. It’s kind of a quiet, sad place, as is the site of any shipwreck, I suppose. We stay a bit, lost in the memory of this tragic sinking, then go on our way.