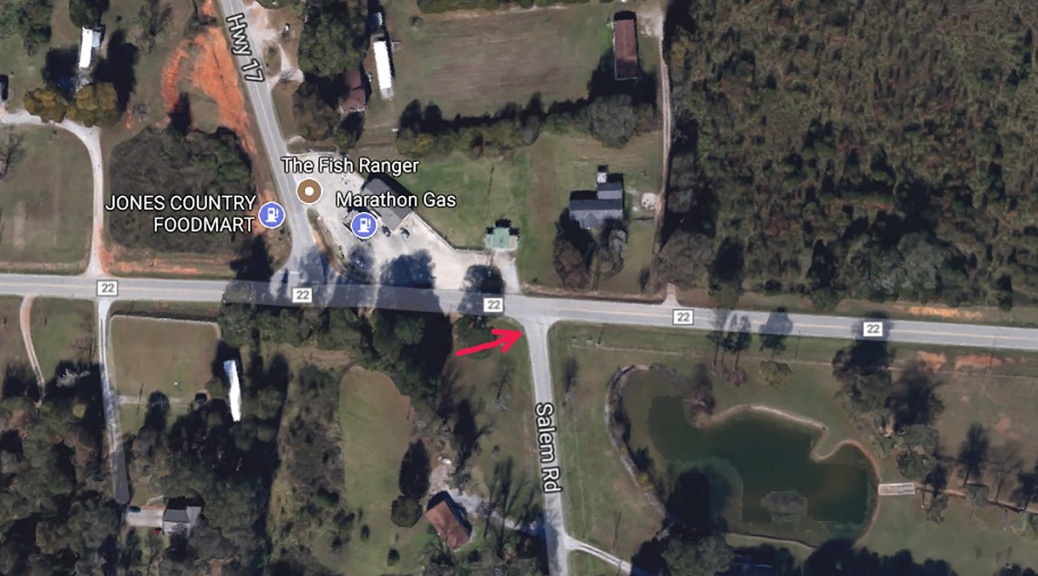 Sept. 11 | Day 5: We suit up for rain that morning in Birmingham, Ala., knowing we’ll get wet this day, even though the mission navigator1 has kept us away from Hurricane Irma. It’s already drizzling as I load the Vespa and Terra Nova.

We leave I-65 and head south on county roads toward Selma, Ala., a holy site of the American civil rights movement. 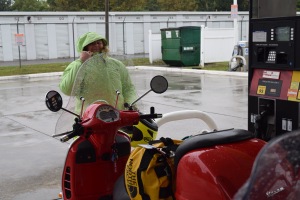 It was there on March 7, 1965, a day known as Bloody Sunday, that Alabama state troopers prevented a group of voting rights protesters from marching from Selma to Montgomery by brutally attacking and beating them bloody.

That horrific assault, the savagery of which cannot be overstated — photos and videos of it are still difficult to see, even today – galvanized the American public and Lyndon Johnson ordered federal troops and National Guardsmen to protect the marchers in a subsequent attempt. They walked for five days and reached Montgomery on March 25.

The violence of that time tipped the balance of American opinion. Historians say it made it easier to pass the Voting Rights Act in August 1965.

The courage of those marchers, who knew the awful danger they faced, has never failed to move me. We plan on stopping in Selma and seeing the Edmund Pettus Bridge, an iconic focal point of the marches.

The rain grows stronger, nearly torrential, as we head south on 261 and 17 past Helena, Brantleyville and other small towns. This is classic rural country, black asphalt roads, gently rolling hills, lots of trees and fields. Traffic is almost nonexistent. The rain forces me to keep the helmet visor cracked open a bit, up enough to prevent it fogging up, down enough to keep the rain from stinging my face.

In Underwood, Highway 17 ends at 22. We turn left, passing a small Citgo gas station, then a quick right to head south on County Road 15. 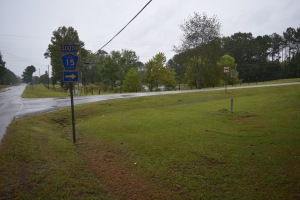 Ahead of me, Linda makes the right onto 15 and I watch in shocked amazement as the Vespa slips out below her and she falls down hard on the asphalt.

The scooter slides across the road on its right side and she is underneath. I am so surprised I find myself thinking How did that happen? Is she moving?

I hit the brakes, slow down, and roll ahead of her, thinking to myself, Be careful. Don’t make this worse.

I stop Terra Nova, hit the kill switch for an emergency shutdown, kick the sidestand, and get off as quickly as I can. She’s still on the ground as I rush over.

“Are you okay? Are you hurt?” I ask. The Vespa’s engine is still running and I hit its kill switch and start pulling at the scooter, trying to move it off her.

She says she’s all right. “I don’t know what happened,” she says, and starts wriggling out from underneath the Vespa. 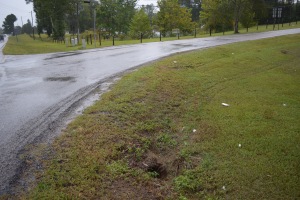 I start to defocus from crisis mode and realize — the perceptions arriving late, a second or two out of sync — that a couple of cars have already passed us without stopping. Some sort of white SUV glides past, barely slowing down.

Then there are two guys beside me, in the rain, and they help wrestle the Vespa upright. They’re Hispanic, two working guys, their truck says they’re landscapers. Linda gets up and we thank them profusely, in our crappy Spanish: gracias señors, muchas gracias.

They are the only ones who stop.

Linda walks back to the gas station, literally across the street, and I push the Vespa behind her. Rain is still falling. I park the scooter under the storefront awning, make sure she is all right, and fetch the Yamaha.

We get drinks and Motrin from the gas station store, make sure we’re calmed down, and assess what happened. “What did I do wrong?” she says.

Not a damn thing. I had eyes on her the entire time she was making the turn and I assure her she did nothing wrong. She made a proper turn at a cautious speed. Her tires have good tread and were properly inflated. I had checked them myself.

Searching for a reason — we always need to know why — I walk back out in the rain, looking for oil or coolant on the road surface, something that would have thrown the Vespa. I find nothing.

That doesn’t mean it wasn’t there. The simplest explanation, the one I believe, is that something on the road surface made her fall. She’s wearing good riding gear, which absorbed some of the impact, but still…

“What do you want to do?” I ask, knowing her answer will decide whether we abort the mission here and now. “Do you want to stop or keep going?”

This is worthy of comment: As you may imagine, many people get spooked after falling off a motorcycle, even a low-speed get-off, especially not knowing exactly why it happened. Self-doubt arrives and towels get thrown in. It’s really easy to quit and go home.

We saddle up and head out. She makes the same turn on 15 without incident and I find myself thinking that’s a hell of a woman as we ride on toward Selma. The rain continues to fall.

4 thoughts on “All on the Same Day (Part 1: Underwood, Alabama)”