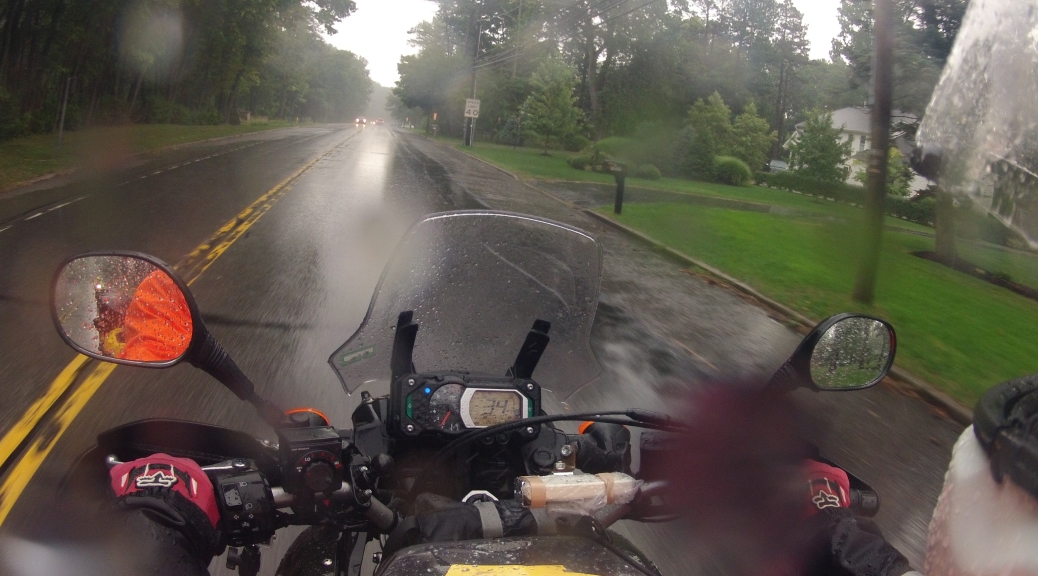 Day 6: Thursday, Sept. 8: Last night’s road to Tawas City, Michigan, was a nightmare of heavy rain in the dark, a constant downpour that soaked through my rain jacket and into my riding suit, helmet and boots. When I woke up still soggy the next day, my only thought was I don’t care what it costs, I’m getting a rainsuit today, dammit!

Nearly all motorcyclists hate riding in rain. You get wet and cold and squishy and clammy, and your visibility is reduced, making you even more vulnerable to inattentive motorists. And your own attention to the road is diverted to water streaming across your faceshield and down your back. 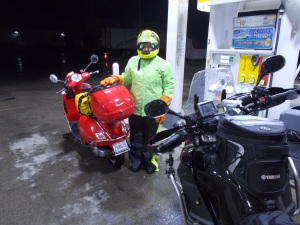 So you have to be smart and suit up for the weather, which is why they say Harley riders are more attractive to the opposite sex – it’s not just the cool bikes, it’s the leather. The rest of us, I’m afraid, look like helmeted vagabonds. As I’ve noted elsewhere, this is why you seldom see rain in motorcycle movies. It’s just not sexy.

But this morning in Tawas City, I feel like an absolute doofus. For all my focus on ride preparation, I’d given little thought to a rainsuit, probably because we’d been pretty lucky in avoiding rain. But now we’re hitting it like seldom before – not just small cloudbursts, but hours of pummeling by firehoses.

Linda was using a North Face rain jacket and pants that worked fine for her. My North Face jacket didn’t quite do the job and I’d mailed home the NF pants three days before in a fit of pique while trying to reduce Terra Nova’s cargo. Ah, I probably won’t need it, I thought, while stuffing it into the box. Another pound gone. 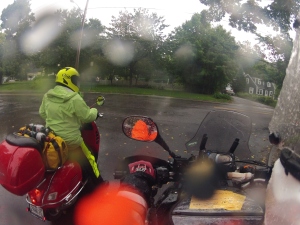 Au contraire, as our friend Ivo would say. So I ‘fessed up to Linda and we started looking for motorcycle shops. Found a Harley-Davidson on our planned route to St. Ignace, Michigan. Perfect!

Besides leather, Harley makes well-crafted, if overpriced, motorcycling gear. But we roll up to the Harley place in Mackinaw City, Michigan, and discover it’s a yuppie-looking boutique without motorcycles sandwiched in between a wine store and a Starbucks. This won’t work, I think, all they’re gonna have is T-shirts and shot glasses with Harley logos on them.

But miraculously they have rainsuits, and I find one – well-fitting with good conspicuity.

“We just got these in,” the guy at the counter tells me. “It’s been raining a lot and we begged the main office to send them over.”

It’s sunny as we ride away to cross the Mackinac Bridge, but I’ll end up wearing the Harley rainsuit over my BMW jacket and Rev-It pants nearly every day for the rest of the ride.

I’ll find it seals out the rain quite nicely and provides an extra layer of insulation across the northern shore of Lake Superior. So I’m much less miserable, even though I look like a grubby astronaut.